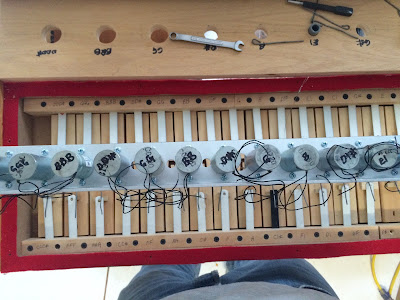 For those of you who have not been following along at home, please check out the first three installments of this project. Since my last post I finished the plumbing, again with the help of my friend Jim. You may remember from earlier posts that the wind chest has valves that control the flow of air to the organ pipes. Here you can see them with white leaf springs holding them closed. The air then needs to actually get to the pipes, which sit over the holes some of which you can see in the top of the picture. 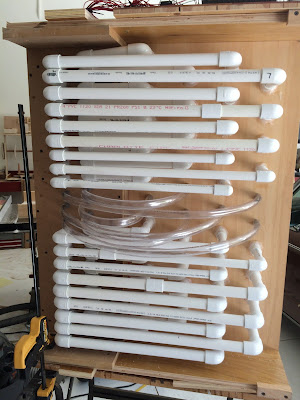 This was accomplished using pvc plumbing pieces as shown here. The underside of the wind chest is on the left and the organ pipes sit atop the plumbing on the right. 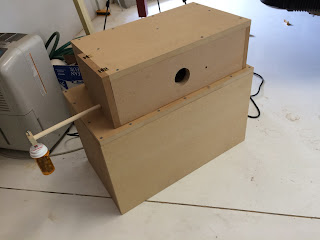 Here is my source of air or as the organ folks say, wind. I couldn't afford a real organ blower so I went with the Shop-Vac solution. I built this box to accomplish two things. First, one could hardly hear the organ over the roar of the Shop-Vac so I needed to do something about the noise. Second, the higher the pressure in the organ the higher the pitch of the pipes. Therefore, a pressure regulator is needed to limit the changes in pressure that occur as different numbers of pipes are playing at one time. The lower box contains the Shop-Vac and muffles its noise. The upper box further muffles the noise and regulates the pressure.

Let's start with the pressure regulator first. My friend Jim used to have an HVAC (Heating, Ventilating, and Air Conditioning) business and he showed me how they regulate pressure in those systems. You can see an example on the left side of the top box. There is a door, hinged at the top. Sticking out of the door is a rod, and on the rod is a weight. When the system is running, most of the time it produces more air than the organ needs. The excess air shoves the door open and escapes. If the pressure starts to drop, as it does when more pipes are playing, the lower pressure can't hold the door open as much so the door closes a little and that boosts the pressure. The pressure can be regulated by sliding the weight in or out on the rod. 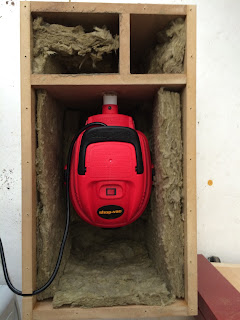 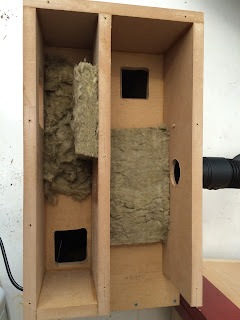 Now for the sound deadening. Here is a picture of the upper box (left) and one of the lower box (right) with their tops removed. The air inlet is on the left side of the upper box, near the top of the picture. I have sound deadening insulation near the opening because I found that there was some noise from the airflow, and some from the Vac, and insulation near the opening seemed to quiet it. The air is drawn into the hole on the left near the bottom of the picture, down to where the Vac is. Now looking at the picture of the lower box the opening from the upper box opens into the large compartment where the Vac is. The discharge from the Vac goes through the short white tube into the small compartment on the upper left of the picture. It then passes through an opening into the small compartment on the upper right. From there it flows back up into the upper box through the hole you can see in the upper right of the left picture. This compartment has the pressure regulating weighted door. The air that doesn't escape through the pressure regulator flows through the round hole through a hose to the organ. All those twists and turns, with insulation at strategic points cause the sound to be dramatically reduced, from about 90dB to about 73dB. 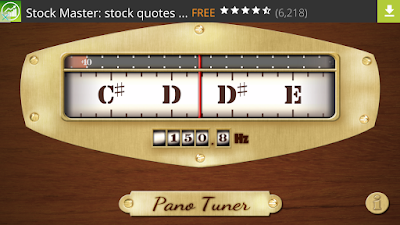 After getting the organ working, Jim and I went through endless sessions of tuning the forty-two pipes. We used an app called Pano Tuner, a screen shot of which is shown here. The app worked beautifully, the organ somewhat less so. After much trial and error we learned that the pipes were so close together that their sound was impacted by the pipes around them. Also, at first we were playing around with the pressure and every time we changed it we had to re-tune all the pipes. Even after we chose a final setting for that, though, we would tune the organ in the morning and when we came back in the afternoon the pipes would all be sharp or flat. We figured it may have to do with temperature and humidity. I live in Florida and the organ is in my garage so those parameters can vary quite a bit but I haven't brought it indoors yet to test that theory. 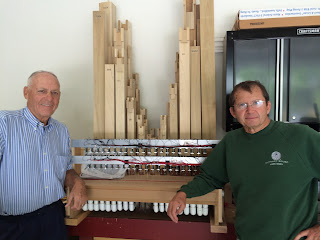 And that's it. Here are me (on the right) and Jim relieved that version 1.0 is complete. Now, those of you who have stuck with me this far get either a reward or punishment depending on your perspective. Here is a link to a YouTube video of the organ in action. Thanks for reading my blog.

And thanks once again to Matthias Wandel at woodgears.ca and Raphi Giangiulio at rwgiangiulio.com. I stand on the shoulders of giants.