Music and me continued

In my last post I said my wine glass playing machine was a little bit of a bust-out. I came across a couple of things on YouTube, as you do, that sent me off in a new direction. The first came from my old standby Matthias Wandel at woodgears.ca where he documents a pipe organ that he made some years ago. I found it interesting but it didn't quite tip me over the edge for two reasons. One, I didn't really want to make a keyboard instrument, and two, he wasn't quantitative enough for me on the making of the pipes.

Then, however, I found Raphi Giangiulio's YouTube videos on how to make wooden organ pipes. My eyes were opened. All the woodworking called for in his videos was well within my capabilities so I made a Middle C pipe according to his specifications, which I demonstrate in this video.


I checked it with an electronic guitar tuner and it was spot-on. Drunken with my new power, but concerned that one pipe does not an organ make, I decided to build some smaller pipes (because they're quicker to make and require less material.) I made F, E, D#, D, C# and C above Middle C, as can be seen in this video.


They have not had their final tuning yet, but they also worked. They have a little bit of a tin-whistle sound, though, so I thought I'd make a bigger pipe and made E below Middle C.

Now I had to figure out what I was going to do with these things. My wine glass machine came to mind and I figured instead of glasses I would have it play organ pipes.

It was at this point when Paolo, a friend of my neighbor came to visit her from Italy. I was tinkering with the pipes when he happened to wander over, and he got a big kick out of them. He expressed interest in helping with the project and we spent the next ten days working on it. The first thing we had to build was what they call, in pipe organ lingo, a wind chest. This is the part that is pressurized by a blower (a shop vacuum in my case) and has a valve for each pipe. Paolo and I used the wind chest design from Matthias Wandel noted above and here's the result.

The wind chest is the part at the top with the red felt to help seal the cover when it is in place. From underneath the wind chest a tube runs from each valve to the corresponding hole in the pipe platform. As you can see I've only run the tubes for the pipes that I've already built. 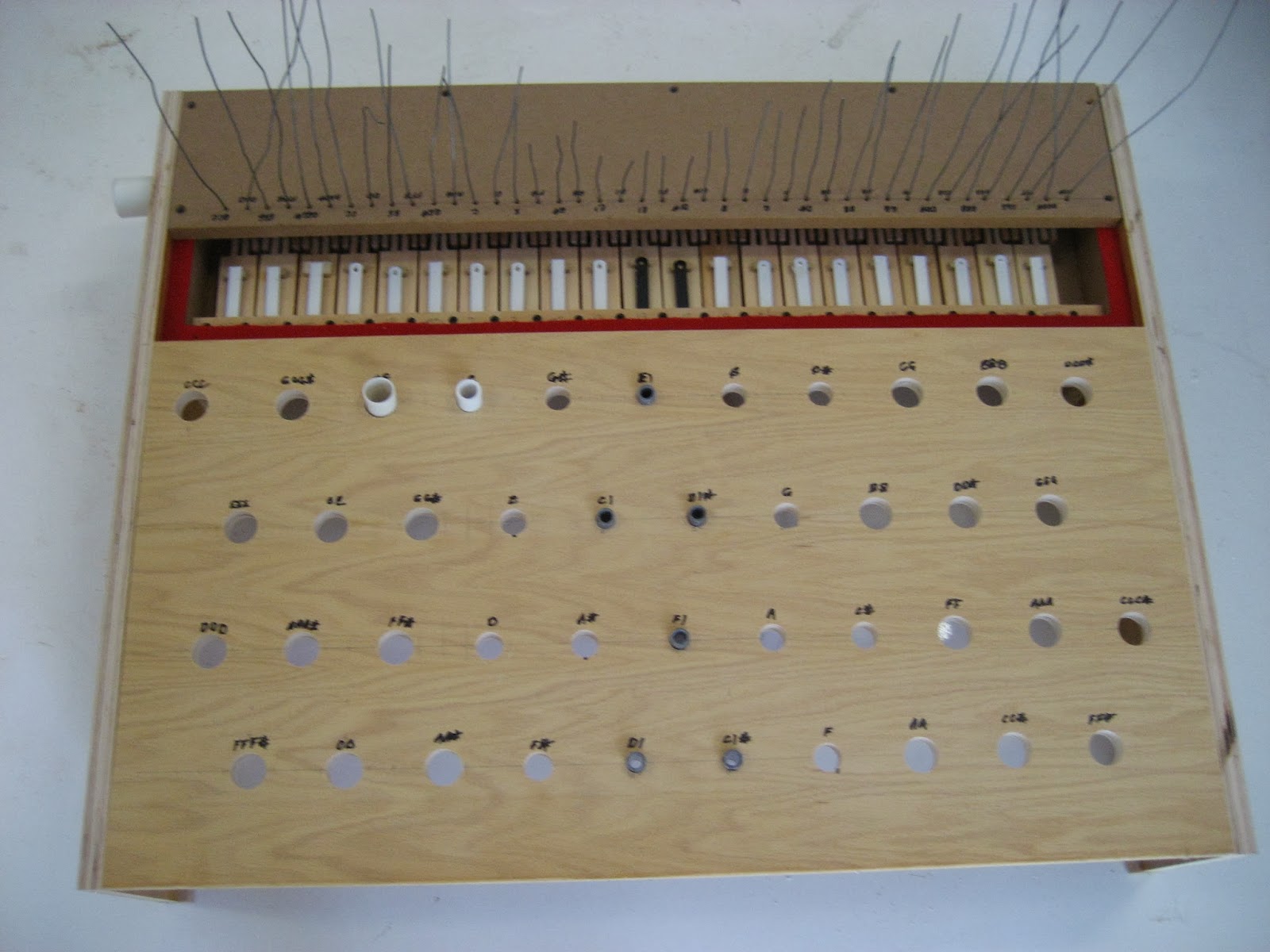 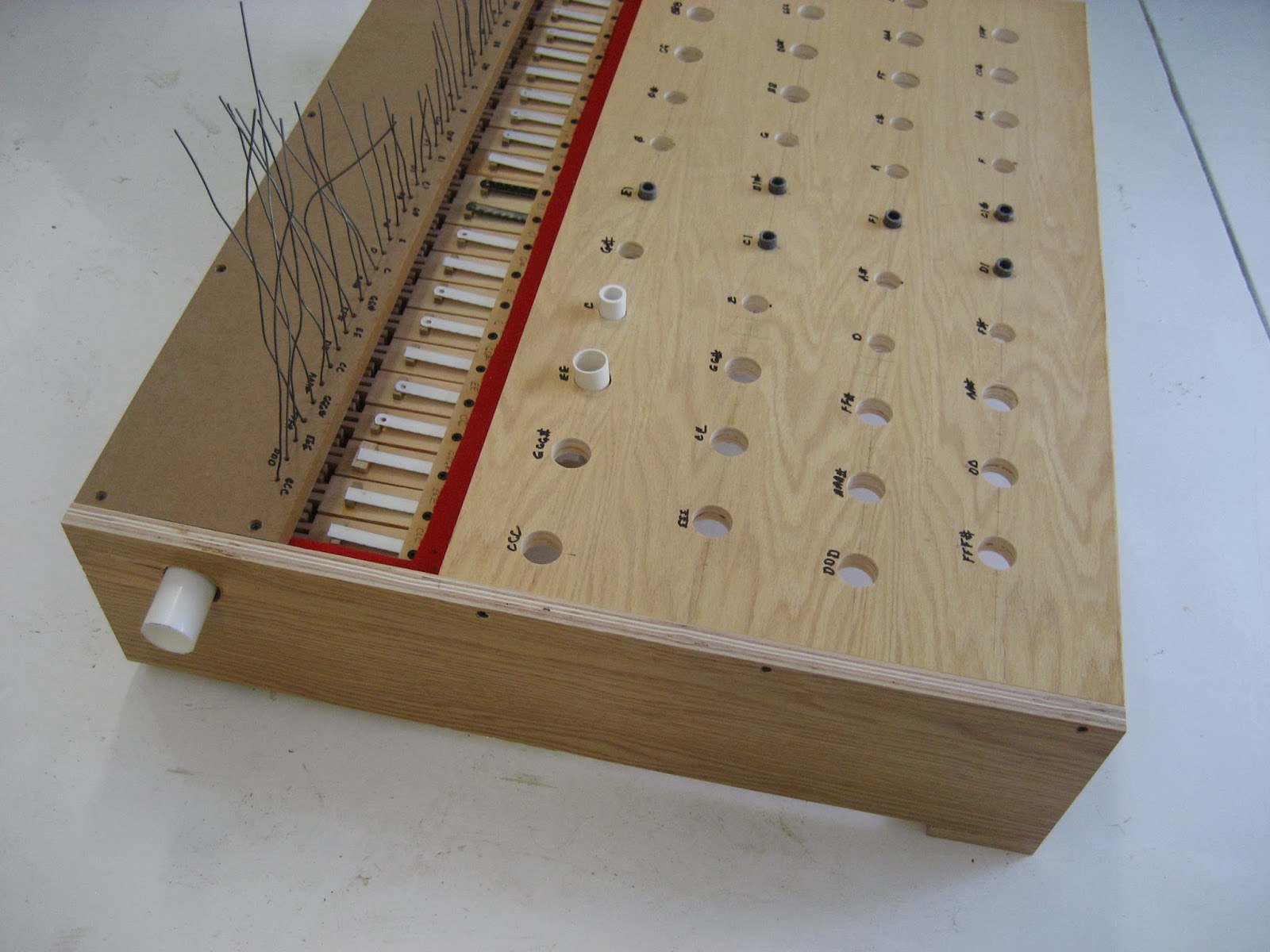 The wires, when they are lifted, open the valves. When the valve is opened the pipe "speaks". Presumably these forty-two wires would be lifted by solenoids triggered by the computer.

Why forty-two you might ask. As I said, I liked my Middle C pipe, and E pipe, but the lower pipes sounded better than the high pipes, so with no more thought than that I decided to make (eventually, if I don't get sick of it) the Middle C octave, the two octaves below, plus the six pipes I had already made above. Chromatically, that's forty-two pipes. (As I said I didn't think too deeply about it.)

Here's what it sounds like, again without final tuning.

You might notice that in the video there is some background noise. That is my shop vac, in the garage, with the hose running underneath the almost closed door. Okay, that still needs some work. I see why shop vacs never caught on in the great cathedrals of Europe.  I've got some ideas though, and Paolo and I have been trolling the second-hand stores.

To actually connect this to a computer would require maybe $600 worth of solenoids and midi decoders (not to mention the 33 pipes I haven't made yet) so the likelihood that I'll finish this anytime soon is pretty low, but we'll see.